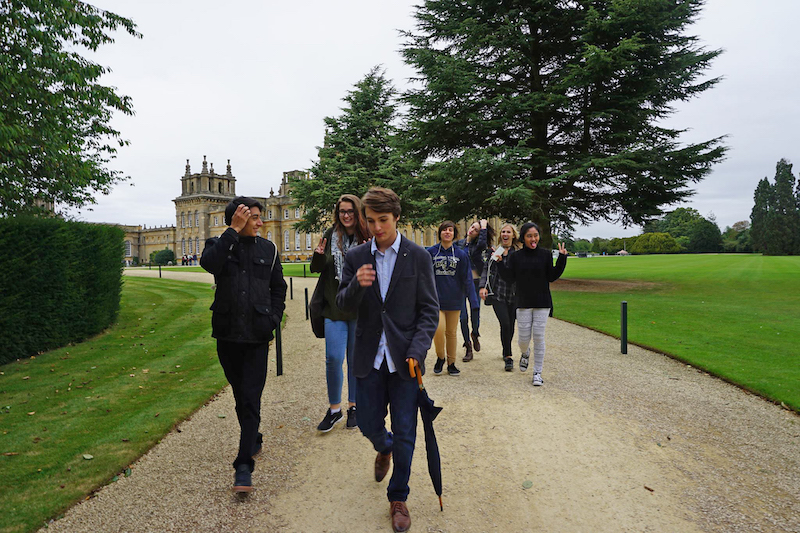 Marie Rimolsønning explains how she left her homeland to study at an international school overseas, and what it's like living in a multicultural environment where seven languages are spoken...

I always knew I wanted to see more of the world. As a child, I planned to travel all over the world and see everything. My plan from the beginning was to do at least one year of high school in another country, not that my parents agreed. When I turned 15, I finally decided that I wanted to go to England, more specifically: Oxford. I made presentations and plans to show my parents the reasons I should go. I got a summer job and I worked hard to get good grades at school. In my head, the hardest part was convincing my parents to let me go. I didn’t think too much about how I would fare at the school, as long as I would be able to go.

The thing about international schools is that it is significantly different from a local school in the Norwegian countryside. First of all, people are different. I did have some idea of the people that would go to the school, yes, but I had never really thought about how different cultures can affect how people act. Secondly, constantly speaking in a second language is harder when you can’t just quickly ask what something is in your first language. I had never experienced culture shock before, and it hit me like a brick. The first week was overwhelming, in a good way. There were so many new people, new names, new accents, all in a new country. It isn’t something that you can prepare for, you just have to experience it. After the first week, it all calmed down in a sense. First impressions came and went, everyone got to know each other and it didn’t take long to establish strong friendships. I quickly became friends with people from Brazil, France, Indonesia, Germany, USA, Mexico, Spain, Korea, Morocco and much more. Looking at it in retrospect, my life changed a great deal in just a few weeks.

Everyone at school usually speaks English to communicate with each other, as it is the most common language between us. In the beginning, I was very self-conscious about my English, as I felt that my accent was too prominent and weird. This went away swiftly as I realized that nobody judged me because of the way I spoke. Everyone was open and helpful. I think the openness and tolerance in international schools are unique.

I think most international students can relate to the language barrier that comes from talking in your second or third language. Most of the time, conversations flow naturally, no struggling to find the right word or mixing up tenses and such. But then comes a day when you’re tired, or just have a bad day, and everything unravels. I’ve been on both ends of that conversation more times than I can recall.

In my group of friends, we have at least seven languages between us at all times. Usually the only common one is English, which is not a problem since we all consider ourselves fluent. Sometimes however, an expression or some kind of hybrid word sneaks its way into the vocabulary confusing everyone, including the person who said it. I have caught myself telling people I have “good time” which is not just grammatically incorrect, it does not make a lot of sense. What I mean with the expression is that I still have some time before I need to be somewhere. People however, take it as I am having a good time. A conversation about rules with your roommate can take a completely different turn when she mentions being executed instead of expelled. Imagine my surprise when she wondered if she could be executed if she missed curfew!

Living in such an international environment we learn to recognize and differentiate between languages. It is such a unique experience when such a diverse group of people get together. Everyone in my friend group knows the words for ‘yes’, ‘no’ and ‘thank you’ in most languages between us. Finding a common word by accident is a fun phenomenon. The word “cinnamon” or “pineapple” is very similar in most languages between us, except for English for some reason. Sometimes when someone can’t find a word they say it in their own language and some of us will be able to understand it, then we can help them find the same word in English. To experience how languages overlap is completely different from learning about it in a classroom.

I am lucky to live in such a diverse environment. Since starting school in September 2016, I have formed lifelong friendships with people from all over the world. We have bonded over the fact that we are different, and that we can learn from each other. I believe that the difference in language and experiences gives a better view of the world and builds up our understanding and tolerance for different cultures. We are able to look past differences and build friendships on the basis of mutual understanding, no matter where we come from. I wish that everyone could have the experience of living in a multicultural environment. It has given me the opportunity to form a better understanding and respect for different cultures, and to find friends from all over the world.

Marie Rimolsønning is from Norway and is an IB Diploma student at EF Academy Oxford.

This article first appeared in Issue 8 of World Student magazine. To read the current and past issues, go to www.world-student.com.