The Isle of Wight covers an area of about 150 square miles and sports a population of just over 140,000. Similarly shaped and with a slightly larger land mass, the steaming city state of Singapore supports 5.5 million.

The latest census for this year shows the Chinese comprise 74 per cent of the resident population, Malays constitute 13 per cent, Indians 9 per cent and 'others' just four per cent. To young Singaporeans brought up in an environment of racial harmony and social cohesion, the two race riots of 1964 that left more than 30 dead must be unimaginable. Each start of day in school they recite the National Pledge: 'One united people regardless of race, language, or religion'.

As Gandhi is to India, so founding father Lee Kuan Yew is to Singapore. His considerable political skills, oratory, wit and wisdom shaped the creation of the independent republic in 1965:

'We have made home ownership the cornerstone of Singapore's public housing policy - the vast majority of the population own, not rent, their homes.'

'We are mindful of the dangers of high welfare and unemployment benefits, watching the consequences of this compassionate policy on the job-seeking habits of the unemployed.'

'A society to be successful must maintain a balance between nurturing excellence and encouraging the average to improve.'

Singapore today is an array of architectural wizardry and a vast freshwater lagoon reclaimed dramatically from the sea; an island of hundreds of individually numbered high-rise apartment blocks, each impeccably maintained; a garden city of meandering tree-lined avenues and vast botanic gardens; a metropolis which works, underpinned by a finely integrated, air-conditioned travel system.

And, of course, the city presents a world renowned education system, rooted in Lee Kuan Yew's unequivocal ambition for excellence. I am attending the annual leaders' conference* for British Schools in south east Asia. They have gathered from China, Malaysia, Thailand, Brunei, Indonesia, with invited principals from South America and Europe.

To be amongst those leading some of the great international schools across the globe is a special privilege. It is also a window into what excellence in schools really means. I have written and lectured widely on the subject, and here I am steeped in living examples. It is humbling and, to be honest, makes me think afresh about what I am describing as 'excellent' in the UK.

An added bonus is that the conference is hosted by the Tanglin Trust campus. The three schools (3 - 18) are this year celebrating their 90th anniversary, and have earned an enviable reputation amongst families over many decades. The leaders are inspiring, day-to-day organisation for 3000 students is impeccable, classroom practice is highly engaging, professional development is cutting-edge. Indeed they embody my own definition set out in The Restless School: 'An excellent school delivers superior performance and has a high impact over a sustained period of time.'

I find time too to visit one of Singapore's much vaunted state schools, an institute set on a breathtaking piece of real estate which, amongst a myriad of achievements, hosts annually a series of workshops led by Nobel prize-winners. I am fascinated by the information from the principal that, given all students are destined for university, they don't bother to make them sit O levels at 16 - thus saving six months of exam preparation - enabling breadth and depth of study and wider curriculum opportunities before moving on to A level. I ask myself how long should GCSEs survive for similarly able students in the UK.

The sheer scale, business, wealth and diversity of schooling never cease to fascinate me.

Roy Blatchford is Director of the National Education Trust (www.nationaleducationtrust.net) and author of The Restless School - which can be purchased via johncattbookshop.com

(*A visual transcript of Roy Blatchford's FOBISIA conference speech is below.) 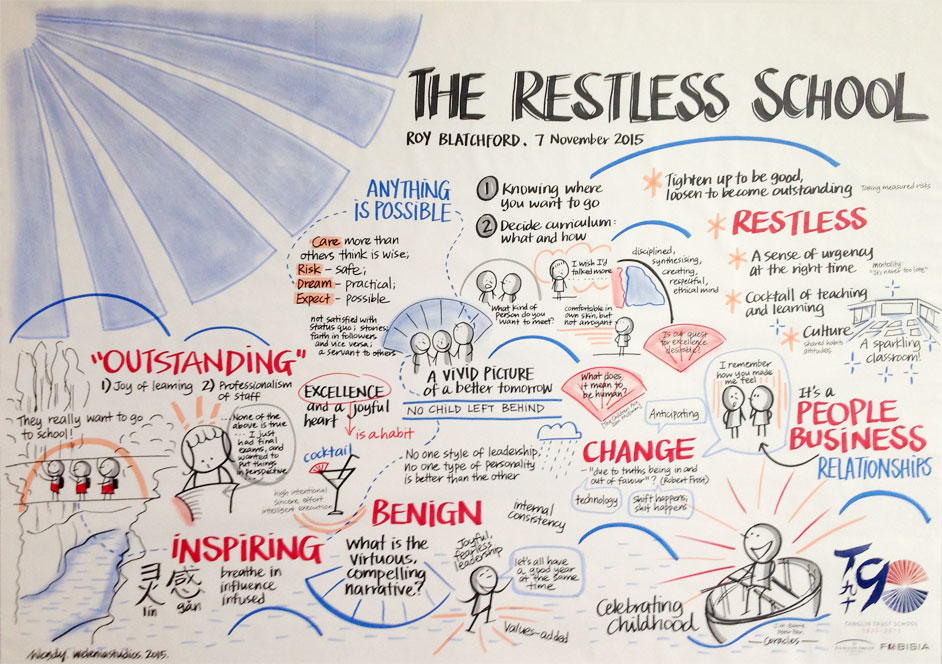