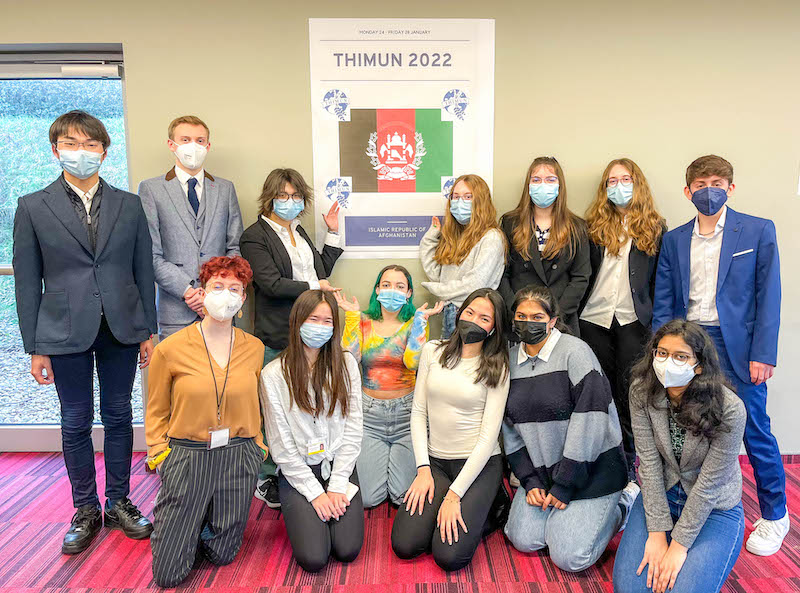 15 senior students from the International School of Düsseldorf (ISD) took part in the 54th Hague International Model United Nations (THIMUN) conference early this year. The annual five-day event attracts over 3200 students and teachers from approximately 200 schools around the world, representing more than 100 different countries. An academic simulation of the real United Nations, the conference aims to educate students about current events, topics in international relations, diplomacy, and the role of the United Nations.

This year’s theme is "One Planet, One World  Debate, Decide, ACT Now!", reflecting the concerns of young people around the world that action is not happening fast enough on the problems we all face: climate change, racial and social justice, and threats to democracy.

Each school is allocated a nation or NGO to represent. The participants research their country, take on roles as diplomats, investigate international issues, debate, deliberate, consult, and then develop solutions to world problems. This year, ISD was chosen to represent Afghanistan, which was a more challenging assignment than usual for the students.

Says ISD English Department Head, and Model United Nations coordinator, Claire Schwarting: “The students’ first question was “Are we representing the Taliban?”. However, as the UN doesn’t recognise the Taliban as the legitimate government of Afghanistan, this meant our delegates had to navigate their roles as ambassadors of an administration in exile, for whom the future is uncertain.”

In their roles as international delegates, students are required to draw on a variety of communication and critical thinking skills – such as public speaking, group communication, research, policy analysis, active listening, negotiating, reaching consensus, conflict resolution, note taking, and technical writing - in order to best represent the policies of their country. The standard of the debates is high, and intense concentration is needed in order to follow the arguments being discussed.

In total, the conference passed 88 Resolutions, several of which were co-submitted by the ISD delegation. The most notable of these were: measures to increase youth participation to address climate change; measures to improve access to clean water for all; measures against fiscal fraud. These will be included in the 2022 conference record, which will be housed in the library of the United Nations Headquarters in New York.

The conference is organised by the THIMUN Foundation, whose mission is to “promote and foster collaborative solution-oriented discussion to important global issues by instilling a life-long passion in youth to take an engaging role in the future and become more responsible global citizens.”

By researching and adopting views and attitudes other than their own, and by interacting with other young people from around the world, students not only gain a deeper insight into the causes of conflict between nations, but also a greater understanding of the interests and motivation of others.

Says Ms Schwarting: “During conference week, students seem to grow before our eyes; they stand taller, speak with more empathy and authority, and carry themselves with more confidence. Breathing the rarefied air of such weighty debate has a wonderful impact on them! Of course, this is exactly what we try to do at ISD each day; we believe that a "well-educated child" is one who can take his or her place among the future leaders of the world.”