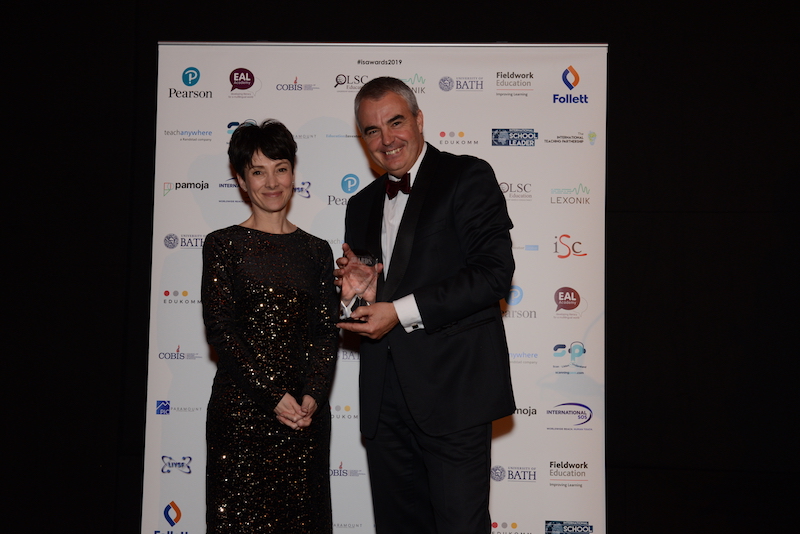 Winners of the 2019 International School Awards were celebrated at a ceremony in London last night, including seven COBIS member schools.

Colin Bell, CEO at COBIS, said: “COBIS is absolutely thrilled that so many of our member schools received top accolades in the prestigious International School Awards across such a broad range of categories – including winning the overall International School of the Year Award 2019.

“This outstanding achievement is testimony to the global quality of COBIS school members, which are constantly raising the bar in terms of standards, and we would like to congratulate all winners.

“COBIS has recently launched the rigorous COBIS Patron's Accreditation scheme, focused on school improvement for international schools, which supports the highest standards of communication, child protection and individual pastoral/academic support. Through this scheme and several other COBIS events and initiatives, COBIS is taking the lead in encouraging and supporting all our members to achieve excellence.”

COBIS school is overall winner for 2019

The International School of the Year 2019 was awarded to COBIS member school, British School Muscat, Oman. The school was a finalist in two of this year’s categories which attracted over 230 nominations from international schools across the world.

British School Muscat won the award for the Outstanding Strategic Leadership Initiative for its teacher and teacher assistant training programme for Omani nationals, which provides professional development to British international school standards, for educators in the school and within the wider community. The programme has resulted in the successful appointment of eleven new Omani nationals at the school, and eight new interns.

The school was also a finalist for the Creativity in Learning Award as a result of its innovative ‘Discovery Learning’ teaching initiative which provides a child-centred, enquiry-based approach to children in Key Stages 1 and 2. Principal of the British School Muscat, Kai Vacher, received the overall International School of the Year 2019 award from Sharon Hague, Senior Vice President of Pearson.

The International School Awards aim to recognise and raise awareness of some of the very best initiatives being implemented by international schools today.