A ride down Lake Street

Finn Carpenter is a student at the Anglo American School of Moscow, where he has lived for the past eight years. His parents are originally from St. Paul, Minnesota and he describes the scenes he witnessed while visiting over the summer months.

Despite being an avid fanatic of all Harry Potter-related indicia, I consistently find myself juxtaposing my own life with that of the main character, specifically on his views of the summer months. When Harry returns to the Dursleys at the end of each school year, he is trapped inside and relishes any chance to skip out on his imprisonment, a most relatable predicament during the summer of 2020. For more than a week in late May, I found myself trapped in my house for an entirely different reason than I had been for the past few months. In fact, not only myself, but also my city and many others across the country experienced a time of curfew, low flying helicopters, and severe public outcry.

Slightly after this time, only a day or two following the lifting of curfew, my mother insisted the family accompany her on a biking excursion across the city down Lake Street. For those less up to date on their geography of the Minneapolis area, Lake Street had been one of the centres of the rioting resulting from the killing of George Floyd at hands of police officers. We set out around mid-morning, just a slightly windy summer day and sunglasses blocking the blindingly pleasant light. Having lived outside Minnesota for the majority of my life, I have never really known the streets around me, let alone comprehended the arbitrary distance that is a ‘mile’. Thus, after less than fifteen minutes from home when we had crossed the bridge over the Mississippi onto Lake Street, I was rather nonplussed. I had not realised that the events which I, and much of the nation, had been viewing from a screen, were taking place so close to where I sat oblivious. 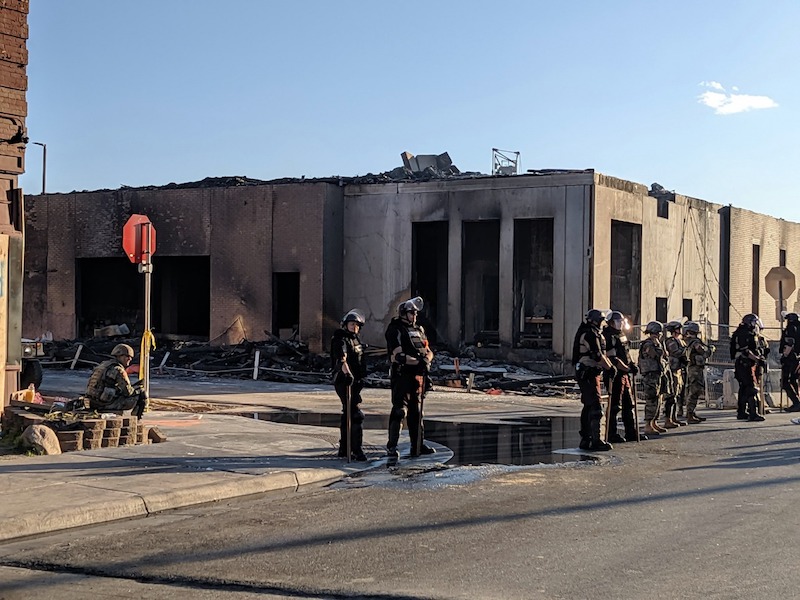 We were biking at a leisurely pace, having quite the pleasant time and passed a diner I had breakfasted at not too long prior. The shift was subtle at first, a few boarded-up windows here or there. Of course I had seen businesses across the city boarded up in fear of damages, but the condition of Lake Street brought it home to me. After maybe one or two blocks, not only businesses but everything, every window and doorway was boarded up. All the same type of plywood, probably purchased in bulk along with the screws to affix it.

As we continued, signs became more prominent, not only on the boarded windows, but on the sidewalk, buildings, billboards, and light fixtures. For the most part, the messages fell into three categories, the first being a plea. “Minority-owned business” or “families live here” were common for doors and windows. An attempt to communicate to whomever might descend upon that building in particular. The second category was that of mourning, with “rest in power” emerging as a mantra of the protesters. The third type of message was that of anger, and by far the most ubiquitous “F*** the police,” “F*** 12,” and “ACAB” adorning almost any available space. These last two categories, the kind directed not to any particular audience but to the world in general, were splashed over the entire street. While in some places they took the form of simple spray painted graffiti, the much more powerful messages were in the form of real art.

A common question expressed by many is “do I film it?” When it comes to birthday parties, holiday fireworks, or the stunning murals and memorializations of George Floyd down the blocks, I decided not to film, and instead to experience it all for myself, unfiltered. It most likely would have improved this story as I cannot describe the array, but the choice has already been made. If you are interested in viewing such art, I have provided these links here for convenient viewing.

But the street did not end there. The first real sign of damage was the sagging roof of a building. What looked to be a car repair shop was nearly caved in, charred, and blackened. Further down the street the damage became more and more frequent. Not long after, it was every building, one after another that was crisply cut down into a pile of ash and splinters. I vividly recall the ruin of a gas station I had seen burnt to the ground in a livestream only days before. We stopped at a corner, I do not remember which, and all four buildings of the intersection were torched, the one beside us barely standing. My father mentioned casually that the barely standing building had once housed a practice space he rented while in some band or another many years previously. Down the street we could see armed officers, either national guard or police, standing by a side road blockaded with a military vehicle. 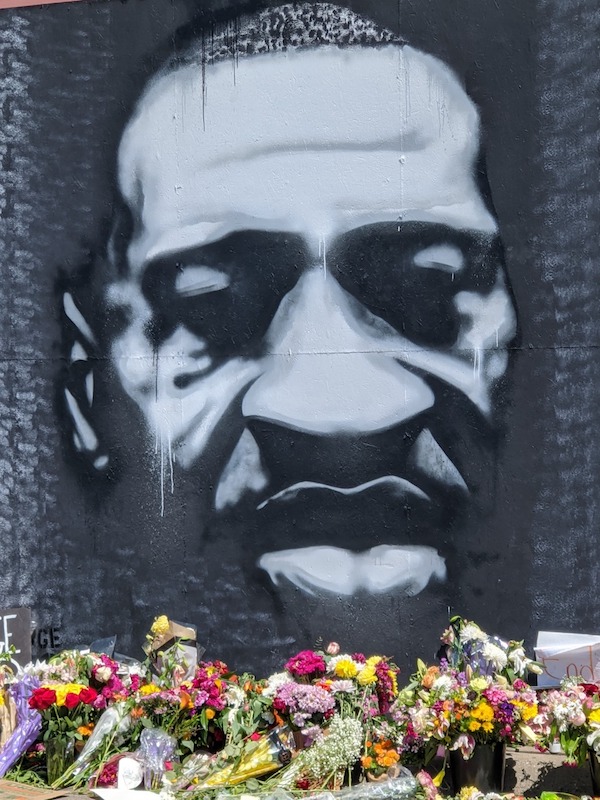 The further we travelled, the further I was amazed, not only by the destruction and the message that surrounded us, but by the people there. While there were some who displayed the absence of mind to drive past this phenomenon as though nothing was changed, the majority of people on Lake Street were there to help. We passed countless groups, some with tables, some with bags, whose only goal was to provide water, food, or other provisions to those who might need them. We stopped for a moment beside a stand of men with tools, who fixed my father's bike free of charge. Why were they providing such a service? Because they could.

The most vivid example of this unprecedented generosity was at the site where George Floyd had been killed. The intersection was blocked off from all sides and, despite the grim nature of the event for which everyone was gathered, there was a positivity in the air. A mural adorned the wall and flowers lay across the sidewalk, people walked about with music playing, chalk writing across the road, and stall after stall of more food, more supplies, and more generosity than could be quantified. As we stood there, a woman offered us sandwiches for no reason at all, just that we were there with everyone else. In the centre of the intersection was a microphone and a wide circle of people around it. Occasionally someone would say something, but for the most part, people just took part in the circle. A few reporters and media affiliates were standing to the side, almost as an afterthought. People were not there to be on the news.

And then it was over. We rode back home. Eventually, I needed to return to school and found myself once more in a situation strangely similar to that of Harry Potter, only this time in reverse. Once I had undergone a flight out of D.C., I found myself at school once again, yet as isolated from Lake Street as a young wizard was from from the place he felt most connected.

Even with the obvious restrictions of quarantine and the sheer distance from point A to point B, I was further encumbered by the international political situation in which I found myself. I had gone from the height of involvement, the centre of the magic of social change, to one of the most removed places I could be.

While others may not share my exact experiences, I am positive that I am not alone in this circumstance. There are versions of this story wherever one might find themselves. Since I am unable to do almost anything, my ‘call to action’ as my English teachers would put it, is limited at best. In my most idealistic dreams, there is a wave of social justice sweeping the globe, entirely predictable given rampant inequalities. But I cannot be a part of it from where I sit, thus my call to action is as follows: do not pass up the opportunity.